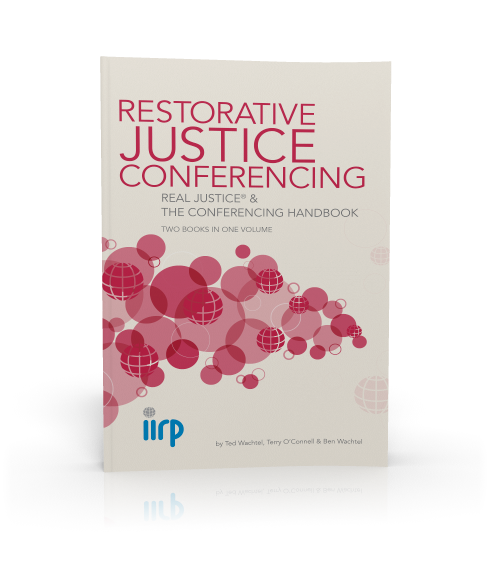 Two books in one volume, Restorative Justice Conferencing combines (1) the official training manual that provides a step-by-step guide to setting up and conducting conferences and (2) actual conference stories to show how conferencing works and how it can change the way our society responds to wrongdoing in schools, criminal justice, the workplace and elsewhere.

Book 1
Real Justice: How We Can Revolutionize Our Response to Wrongdoing
by Ted Wachtel

The founder of the Real Justice movement uses stories of actual restorative justice conferences to show how conferencing works and how it can change the way our society responds to wrongdoing in schools, criminal justice, the workplace and elsewhere. He demonstrates how conferencing benefits victims, offenders and the community by actively involving those affected by wrongdoing in the process of repairing the harm and by fostering the closure and the emotional healing which is largely denied in our current systems. Originally published in 1997.

A procedural guide to coordinating and facilitating restorative conferences, structured meetings between offenders, victims and both parties’ family and friends, in which they deal with the consequences of the offense and decide how best to repair the harm. The handbook covers the process of selecting cases, inviting participants, making preparations and running the conference itself. It is useful to anyone who wants to learn to facilitate conferences in school, criminal justice and other settings. Originally published in 1999.

This store is operated by

All prices are in USD © 2023 International Institute for Restorative Practices. Sitemap | Shopping Cart Software by BigCommerce